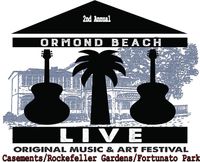 The event is the largest music festival held in Ormond Beach which will feature 13 stages and consist off over 100 local and regional based acts comprising mostly of Rock, Folk, Jazz and Country music. In addition to the live music featured at the festival, the event will also feature over 40 artist display booths, various trade booths, food court, beer garden and kid zone. There also will be an after hour party held at Fletcher's Irish Pub from 8pm-1am which will feature performances from several acts who performed at the festival. This years festival will also be held in conjunction with the Ormond Wine Festival which will feature multiple brands of wine tastings. Last Electric Rodeo- Western/Surf/Rock, Ormond Beach